What we do know, is that radiation at the levels emitted by cell phones and WIFI does have a biological impact. Numerous studies have shown that it impacts the approach cells grow, DNA replicates, and brain cells function. Because of this, health experts believe early childhood and pregnant women are more vulnerable to cell phone and electromagnetic radiation because their bodies and brains are still growing and developing and they absorb more radiation than adults.

A. HIGHER RATE OF MISCARRIAGE

A story told by Dr. Stephen Genuis of a 33 years old woman who want to expand her family. After two normal births, she suffered six miscarriages in a row which are all within first 3 months of pregnancy. In the desperation of find the answer, she measured the electromagnetic fields in her house. She found high fields in the basement where she worked 6 hours a day as a seamstress. At her sewing machine, the magnetic fields at 180mG, and at the head level, the fluorescent lights on the low ceiling at 140 mG. After she made some changed and reduced the exposure, she quickly conceived and produced a healthy baby.

B. NEGATIVE IMPACT ON FETAL GROWTH

" Using a cell phone for calls for more than 30 min per day during pregnancy may have a negative impact on fetal growth. A prospective study should be performed to further evaluate this potential link".  Department of Gynaecology and Obstetrics, France 2020. Source

"Maternal cell phone use during pregnancy may be associated with an increased risk for behavioural problems, particularly hyperactivity/inattention problems", ISGlobal Center for Research in Environmental Epidemiology, Spain. Source

A joint study conducted by Denmark and United States surveyed the mothers of over 13000 children who were aged seven between 2005 and 2006, they found that mothers who had used a mobile phone while they were pregnant were 54% more likely to have children with behavioural problems, such as hyperactivity and difficulties interacting with other children. ¹

In 2008, and Egyptian study also found that use of mobile phone during pregnancy affected their unborn babies; the researchers measured increases in baby’s heart rate and decreased cardiac output in foetuses when they are exposed to mobile phone’s radiation.²

"The balance of evidence suggests that childhood leukaemia is associated with exposure to power frequency EMFs either during early life or pregnancy", Dr Michael Kundi. Source

As many diseases have been discussed linked with EMR, one of strongest evidence is for the link to childhood leukaemia. Nancy Wertheimer published a ground breaking study showing a strong connection between childhood leukaemia and living in a high magnetic fields household. Further more studies, reviews and discussions have been put into this work, a large number of residential studies which support Wertheimer’s findings shows that an increased risk of childhood leukaemia at everyday levels of exposure to live near a high-voltage powerlines or sleeping near electrical equipment. Exposed children had leukemia rates that were double, triple or even four or five times higher than expected.

As we discussed in the previous paragraph, many diseases have been discussed linked with EMR, one of strongest evidence is for the link to childhood leukaemia. Children’s brain absorb more radiation. "The danger of brain tumours from cell phones use is highest in children, and the younger a child is when he/she starts using a cell phone, the higher the risk.", Lloyd Morgan

Children are more vulnerable to cell phone and wireless radiation for a number of reasons. According to Lyn McLean the author of ‘The Force – Living Safely in a World of Electromagnetic Pollution’ children has thinner skulls and therefore radiation is able to penetrate deeper into their heads. As children grow their cells are often dividing; during this process they are more vulnerable to radiation. Lyn also stated in the book that some mobile phones emit signals that lie in the range of alpha and delta brainwaves, the very brain patterns that are constantly changing in children up to about 12 years old, when the alpha rhythm becomes established.

The fact is that the current generation of children is the first to be exposed to radiofrequency radiation for almost their whole lives, this sort of radiation has a cumulative effect. The risks for children seem very concerning.

Many authorities and health experts have advised reducing children’s exposure to cell phone and wireless radiation. 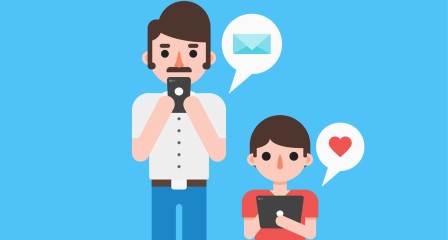 What are the health risks with young children?

‘It is necessary right now to limit the use of cell phones by children and teenagers.’ Dr Yuri Grigoriev

In recent years, mobile phone manufacturers have turned their attention to youth market, as adult market in most developed countries almost reach steady. Not surprisingly, children’s use of mobile phones is steadily growing and the age is getting younger. In Australia, 69 per cent of children under the age of 18 have mobile phones and as many as 40 per cent of 4 to 7 year olds use the devices too.

Many children not only using them during the day but also are sleeping with them. Australian psychologist Michael Carr-Gregg found that many children are allowed to keep their mobile phones in their bedrooms and staying up until late, often they like to keep it turn on and in vibrant mode under the pillow so they don’t wake up their parents. This means their heads are being irradiated as they sleep. Carr-Gregg believes that this behaviour may create a generation of exhausted ‘zombies’ who are less likely able to learn effectively at school.

Another area which EMR affect potentially every family is fertility and reproduction. Over 5 million people in the US suffer from infertility. Many studies have linked everyday radiation exposure to lower fertility in both men and women, even though there is no ‘conclusive proof’ that EMR affect fertility, there’s already enough evidence of harm to suggest that taking precautions to reduce radiation exposure is necessary specially for new and intending parents.

In 2010, the European Science Foundation issued a report that at least 1 in 5 men is “subfertile” and that sperm count and quality has been dropping consistently in the developed world over last 20 years when cell phones become one of main communication tools in everyday life – men’s fertility falling up to 20-30% over the past decade alone.

Dr John Aitken is Laureate Professor in Biological Sciences at Australia’s University of Newcastle and the Director of the Centre for Reproductive Science. In the past decades he has published a number of studies in which he shown that mobile phone radiation reduced viability of sperm. In 2009, Professor and his team exposed sperm to a mobile phone signal of 1.8GHz (the typical frequency of 3G mobile phone signal), they found the sperm had reduced motility and vitality. The fact is mobile phone radiation caused the sperm’s mitochondria to leak electrons, which resulted in oxidation. Oxidation is associated with DNA damage and infertility. Source

There is further caution for fathers would be. Many studies now shown that men who engage in high level of mobile phone use have reduced sperm quality and mobility and increased risk of infertility. It’s worth keeping it in mind that your sensitive reproductive organs maybe absorbing the radiation if you carry the phone in receiving mode below waist level.

Back to Radiation & Health